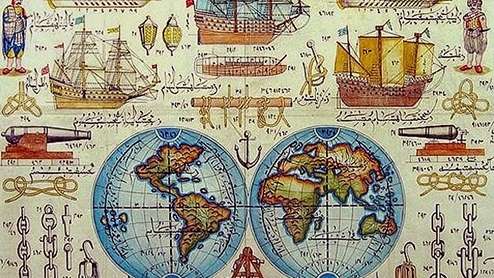 The Development of Maritime in Ottoman History

The first name that brought Turks together with the seas was Çaka Bey. In 1081, the first Turkish Navy with 50 pieces was established thanks to Çaka Bey and even 1081 was accepted as the year of establishment of the Navy in our country. After Çaka Bey, who made important trips to İzmir and Çanakkale, Aydınoğulları principality attracted attention with its maritime activities. In the Aydınoğulları Principality, Umur Bey won great victories against the Byzantines and Genoese in the Aegean. When the Ottoman Empire incorporated these principalities into its structure, it carried the potential navy level to the upper points. In the Ottoman period, the maritime division was divided into three sections and these sections were the Derya Bey Period (1324-1390); The captain was named as Derya Period (1390-1867) and finally as the Navy Minister (1867-1922). During the period of Derya Bey; With the conquest of Karamürsel, the Sea of Marmara was reached. The first Ottoman shipyard was established in Karamürsel, where the first Ottoman battleship was built. During this period, Kara Mürsel Bey received the title of ya Derya Beyi olarak as the name given to the Navy Force Commander. During this period, Izmit, Gallipoli and Istanbul became the center of Turkish Maritime.

During the period of Captain-i Derya, the first organization started in the time of Yıldırım Bayezid and Saruca Pasha became the first Captain-Derya of Turkish Marine History. During the reign of Fatih, one of the largest shipyards in the world, Istanbul Shipyard was established and Piri Reis achieved great successes by making two separate world maps in 1513 and 1528. Piri Reis also made an important contribution to the world maritime history with his book “Kitab-ı Bahriye“. After the conquest of Egypt during the reign of Yavuz, the Ottoman Empire continued its activities in the Red Sea and the Indian Ocean. During the reign of Süleyman the Magnificent, great successes were achieved. During this period, many famous Turkish sailors such as Barbaros Hayreddin Pasha, Oruç and İlyas Reisler, Selman Reis, Murat Reis and Seydi Ali Reis established absolute dominance in the Mediterranean. During this period, Barbaros Hayreddin Pasha defeated the Crusader Navy especially in 1538 in the Preveza Sea Battle. Due to this victory on September 27, 1538, September 27 is celebrated in our country as the Navy Day. Our navy, which had achieved great success in maritime activities until 1699, started the first major land loss with the 1699 Treaty of Karlofca. This has caused the navy to lose importance in the name of maritime. In 1770, the Ottoman Navy was raided by the Russian Navy in Izmir, and therefore, a French engineer named Baran T-tt was used to improve the Navy.

In 1773, the foundation of the naval school was laid by Algerian Gazi Hasan Pasha under the name of Tersane Hendes House. Since 1784, this school has been named ’’ Mühendishane-i Bahri Hümayun ’’. II. During the reign of Mahmut, the event known as Vaka-i Hayriye, the Janissary Quarry was abolished and influences from Europe began in the navy. In 1864, ’Erkan-ı Harbiye-i’ ‘’ ’Captain-i Derya ’’ office was abolished in 1867 and ı r Naval Ministry kadar office was established until 1822 in order to train staff officers. During this period, which was the last period, the Ottoman Empire, which was under heavy foreign debts, failed in the 1877-1878 Ottoman-Russian War and the navy was left idle and the maritime activities suffered greatly. When the Second Constitutional Monarchy was declared (1958), the Ottoman fleet was in a troubled state. In 1909, the people had formed an association called the Navy Society. With the efforts of this Society, warships were obtained from Germany. After these processes, our navy seems to be active in Tripoli War and Çanakkale. The enemy navy, which caused massive material losses by hitting the mines spilled by the Nusret Mine Ship, was defeated in Çanakkale. After the First World War, which lasted for four years, the navy suffered a great deal of injury and the navy was withdrawn to the Golden Horn with the Mondros Negotiations signed on October 30, 1918 and the control of the ships was left to a commission.