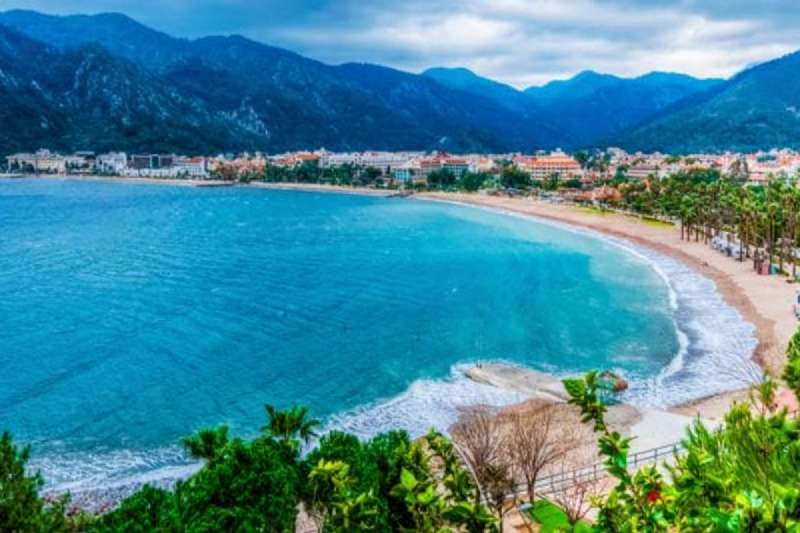 West of Marmaris; Datça Peninsula and Kerme Bay, Ula on the north, Montenegro, Balan Mountain and the Daily Hills on the east, and the Mediterranean on the south. Adaköy, Keçi Island, Sedir Island, and Güvercin Island are located right in front of the bay. Marmaris ship ports are important structures due to their geographical location. The oldest part of the region is Kale Mahallesi which extends towards the sea. Dalaman Airport, where airplane landings and departures can be made, is 1 hour away from the center.

The distance between Marmaris and Rhodes can be taken easily in 45 minutes. Mediterranean climate is effective in the district. While the summer months are hot and dry, the winter months are warm and rainy. Due to the locations of the mountains, the annual rainfall of Marmaris is high. Rize, Turkey in general, even when taken after the base is the second most rainfall in the area. The total amount of precipitation it receives during the year is more than 1200 mm. There is plenty of rainfall in the district during the winter season. This situation causes floods in months when heavy rains are seen. The region does not receive much precipitation between May and September. There are many ancient cities within the borders of Marmaris. Since the history of the district is very old, it is common to come across old settlements. Beldibi, Hisarönü, Bayırköy, Bozburun, Söğütköy, Taşlıca, Bozukkale, Serçe Harbor, Sedir Island, and Karacasöğüt are some of the ancient cities.

The port is located on Günnücek National Park road. It is located 100 meters from the entrance of the Netsel Marina. It is easy to get to the entrance of the port by taking the pink dolmus from the city center. It would be beneficial to prefer pink dolmuses going to the direction of the false throat for this purpose. Ferry services are organized through the port. It is possible for the passengers who want to go to Rhodes to get on the ferry from here. There are also taxi stops at the port. There is a 10-minute walk between the city center and the port. This shows that transportation between the city center and the port is easy. Marmaris ship ports are important for the district because of their location. The port is located exactly 36 latitude and 28 east latitudes. Marmaris Liman İşletmeleri A.Ş. maintains the operation of the port.